Inflation is the increase in the price of goods. A rise in inflation means a decline in purchasing power. This means fewer products are bought for the same amount of money. While many factors can cause inflation, such as problems in the supply chain, war, famine, plague or a general drop in productivity; it is mainly caused by increasing the money supply.

We will look at the difference between the rate of inflation and the aggregate of consumer prices over time. We will use machine learning to visualise the correlation between inflation and the money supply. Significantly, we are largely dependent on data from the European Central Bank.

The rate of inflation

Most of the time when people talk about inflation, they mean the rate of change of inflation. On a feeling level, it is much more noticeable when prices jump all of a sudden by 8%, rather than increasing slowly by 2% over time. Generally, most people do not need to listen to the news, economists or data scientists to know that the cost of their shopping has been going up over the past two years.

The Index of Consumer Prices is the aggregated amount of inflation

The Index of Consumer Prices(ICP) is a representation of the prices of specific goods. This data is usually collected monthly. Additionally, the data we are using is harmonised throughout the Eurozone. When the ICP goes up, it means prices across the market are going up. The rate of change in ICP, is what we usually call inflation.

As we can see, the ICP and thus inflation, are steadily going up every year.

Inflation goes up with the money supply

We are measuring the money supply by the M3. The M3 is an aggregate of all the money in the Eurozone, in the broadest sense. As we can see, the money supply and ICP go up together at a similar pace. Although it should be noted that the ICP has gone up sharply during COVID, at a faster rate than the M3.

Correlation between the M3 and ICP 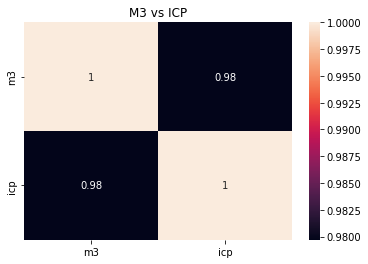 The ICP is correlated to the M3 by 98%. So sometimes the inflation rate goes up faster than the money supply, or the ICP does not go up with the M3, but they are correlated 98% of the time. By increasing the money supply, we are likely to increase the cost of goods by 98% across the market.

What machine learning says about inflation

Using a linear regression model, we can see the relationship between the ICP and the M3 more clearly. Pretty much as we increase the money supply over time, inflation will go up with it. If the amount of money that is pumped into the economic system remains the same; we should expect prices of goods to double almost every 20 years.

In 2044, don't be surprised if a pint of Guinness in Dublin will cost around €14. That’s not even taking into account tax increases, potential economic collapse or WW3. The other possibility is that all of a sudden we could become more productive, and prices could go down. Conversely, new technology can make the economy more efficient and thus bring the prices of goods down.

In a European context, we would have to develop a new way to produce food and accommodation which leads to a dramatic drop in prices. Although, this is unlikely.

Richard Vague from Evonomics conducted a study that concluded that Rapid Money Supply Growth Does Not Cause Inflation. The difference between their study and ours is that they looked into the rate of change, whereas our machine learning model plotted the aggregated amount of ICP and M3.

Austria also suffered large levels of inflation in the early 1920s. As the legend goes, Austrian economist, Ludwig Von Mises brought other economists down to the main street of Vienna, where they could hear the drone of the money printing press and informed them to stop the money printing press. Following that,  Austria reduced government spending and returned to the gold standard, which resulted in a few years of economic stability.

Returning to a commodity-based currency like grain, cows, gold or silver, would help reduce the money supply and thus proven historically to reduce inflation. The other alternative would be to encourage workers to be paid in cryptocurrency; ideally a stablecoin like Dai, which is already being used to pay some employees.

Code and data for machine learning are provided here.